Why doesn't Dennis Kang have a national holiday named after him?


As you probably know, there are very few weekday holidays this year and it made me wonder why Korea doesn't have more holidays that celebrate famous Koreans. I wrote this to Ask a Korean a couple weeks ago, but haven't heard anything from him, so it's yours.

Ha! Get in line on that one. The Korean is slammed with questions that are much more nuanced than the ones I get. I asked him a question over a year ago and haven't heard anything back aside from the initial response (which you should have gotten) that went something like this:

"The Korean is intrigued by your question and wants to answer it on the blog."


He was more eloquent though and also told me it would be awhile. I had asked about why some Koreans refuse to believe sources or facts unless they see it reported by a Korean or in Korean. I'm alright with the wait since I know the answer will be great.

So since The Korean is busy, I'll take a stab at it for you. 2010 is a pretty bad year for "red days". Many of them fall on weekends and destroy tons of golden travel opportunities. My wife and I were planning on popping down to Vietnam for the upcoming Lunar New Year break, but the pathetic three-day weekend wrecked that one. We'll have to settle for Japan or Taiwan which doesn't really excite me.

On the surface and especially if you simply listen to the official names of each holiday, it would seem that none of the national Korean holidays celebrate famous, influential or historical Koreans. While some might argue that Buddha or Jesus were in fact part of the minjok, the reality just isn't so. 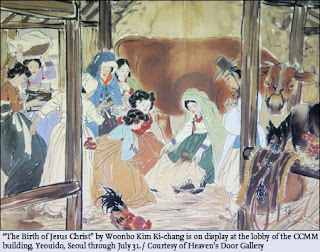 A quick peek at Wikipedia's page on Public Holidays in South Korea will give you all the info you need on which days are special and why. In my opinion, some of them are in fact celebrating individuals accomplishments, but in a very collective, 우리나라 sort of way that one would expect in Korea.

There are, however, two days that I am a little surprised aren't named after the person responsible for the day itself. National Foundation Day celebrates the myth of Dangun who was the founder of the first Korean empire, Gojoseon. While no one actually thinks he fell from the sky or was the son of a bear-woman, people flock to Gangwha-do to see the site of his celestial landing. In fact, that's where the banner picture for this blog was taken (and no, that's not me).  Hangul Day celebrates the day that King Sejong made life much easier for Koreans by creating the Korean alphabet. The guy has statues all over the country, numerous schools named after him and now the Southern government is unilaterally naming a possibly unified Korea's capitol after him. I guess he has enough already, but the day should have come first.


There are a few others who could be more widely credited, like the men who led the charge on March 1st, 1919 or the dude who came up with Children's Day. Hell, The Korea Times even has a special section for Ahn Jung-geun, yet he doesn't get anything. How about Seosan who successfully repelled the Japanese in the late 1500's? He was pretty tough.


Ultimately, there were many influential people who could have been remembered with a national holiday, but it boils down to the fact that Korea is fiercely collective and the ideal of country over self is still very evident, even in modern Korea. Perhaps when Korea is unified or when South Korea has more time to critically reflect on its own past, there will be some more additions, but for now this is what we've got.


All we can do is time vacation well, plan ahead and enjoy the limited amount of holidays we've got this year. And until Korea wises-up, listens to its people and gives them some substitute holidays (like the rest of the world), we've gotta cope and make the most of the weekends.


In my opinion, Dennis Kang should get his own national holiday. He sure does win lose pander compete a lot.

Hm, I don't remember that question. Must have slipped into the spam filter hell.

Man, why you gotta have high expectations for me like that? Now I gotta think harder.

And I'm really sorry to tell you this, but just to let you know -- there are at least 50 emails ahead of your question.

Perfect! That's like over a year. I might as well just head to New York and ask you myself.

Anything I can do to bump it up? Perhaps I can buy you and your future wife some tissues for your new home?

Or the young woman who's celebrated as a martyr from that day, Yu Gwan-sun.