Are birthdays important in Korea?

I have a Korean co-worker who has a birthday coming up and when I asked her if she was celebrating with anyone, she said "no". What's going on here? Do Koreans celebrate birthdays?

Odd really because Koreans, like everyone, love to celebrate their own birthday. Who wouldn't like an entire day where you can guilt other people into celebrating YOU? I just had my birthday and even though I didn't guilt people into anything, I had fun being special for the day. In this specific case, I going to have to conclude that your co-worker was just not that into you and probably didn't want to share her day with you. Sorry.

There are a lot of holidays in Korea. Some are national and others are family-oriented. This past Chuseok alone saw a 25 million people traveling around the peninsula which is a huge number and obviously a very celebrated holiday, but is it the biggest or most important? This got me thinking a bit, so I asked about 50 of my students what they thought with a quick survey.

First question: For you personally, what is the most important holiday in Korea? 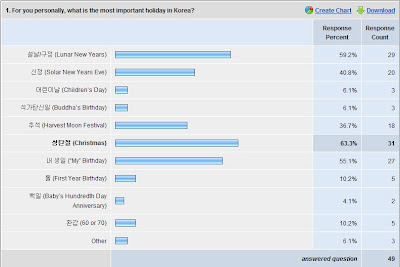 Second question: For the Korean nation as a whole, what is the most important holiday? 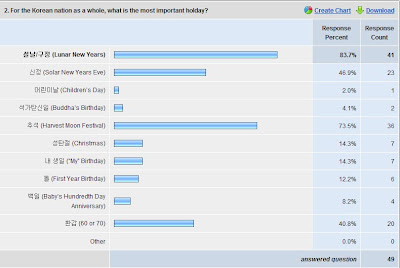 Clearly, birthdays are important to Korean people. I should also note that 환갑, or the celebration that commemorates a person hitting the age of 60 (and now 70) received a lot of attention in the second question, but that's likely because it's viewed as more of a milestone than an individual celebration.

There's another story here though, but before I address it, I'll need to create a survey for you guys. Stay tuned on that front.
by The Expat at 1:30 PM

I don't know the ages of your stduents, but I will note that days when people receive presents are generally ranked high.

Yea......I don't know hoe old your students are but I'm guessing they're thinking of something different. I'm a Korean and I disagree with them. I am responsible and smart enough to know how things work out and work out the right way......but these students may be fooling around with you. They seemed to be a little distracted or something. They're not putting the right answer......of course there is no right answer but....I'm saying that these students are not capable of thinking for their own culture and tries to make fun of it.

I'm going to have to totally disagree with you. First of all, I don't teach English conversation, so the bar is much higher in my classes. My students range from 25-65 are grad students, doctors, lawyers and business-related people who speak fluent English and none of them would be foolish enough to lie on a survey or make fun of their culture.

I'm thrilled that you are "responsible" and "know how things work out", but I don't understand what you're getting at. Would you mind clarifying what you disagree with.

I wondered about this until I asked my Korean wife. She says the main difference between birthdays in Korea and the West is that Koreans only celebrate with family or a boyfriend or girlfriend. It is generally not a day to spend with friends, even close ones. Your poll is interesting, but I think most people outside of Korea would respond the same. Certainly Christmas and Thanksgiving are more "important holidays" than my birthday.