I teach in a private academy and am probably naive, but I read about a "love stick" in the Korea Herald the other day and was wondering if parents knew about the use of them as well.

You are being naive and I assume you're talking about Brian's piece on "Discipline in the classroom."

"These days corporal punishment in school is technically illegal, though still widely practiced. However, both the larger size of students and the widespread possession of cell phones with cameras has made teachers think twice before using the "love stick."

The use or sight of the love stick or "사랑의 매" is extremely common in Korean schools. But as Brian mentioned, kids are using their phones as protection against their use. YouTube features some pretty brutal videos of corporal punishment in Korean schools. I should point out that not all objects used to hit students are officially love sticks. While some teachers clearly prefer love sticks and brooms, others go for bamboo sticks or the good ol' fist. 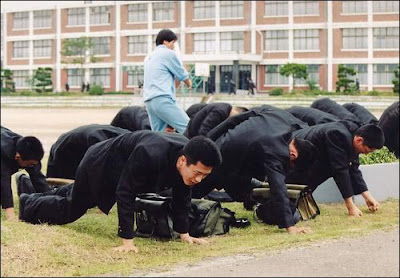 You and I know that abusing children is disgusting and should result in jail time, but as the quote above says, schools usually try to circumvent law or superficially ban the practice by outlawing cell phones in class. Just this year, a student was flogged over 100 hundred times on the feet only to go home and commit suicide. The punishment was for being absent from the after school study session that all high school students are required to attend. The story here is not that a teacher hit their students, but the level of acceptance that the other students displayed.

"Students in the school told the investigators that the degree of punishment the student received actually "wasn't too harsh" compared to the "usually very harsh punishment."

Throw that in with this 2004 study and you've got a majority of students who simply are not all that affected by this abuse.

That says that 79.6% of respondents experienced some sort of physical punishment while in school. It's clear that the numbers are going down, but 79% isn't in anyway a low number. (I couldn't find a recent stat.) Why so common though?

I blame the parents.

First of all, parents often times buy these love sticks for teachers as a signal that beating their child (if necessary) is okay with them. I have seen many love sticks in my years in this industry and teachers usually have a few of them in their classroom. Some of them might be in plain sight and others might be in a closet or desk drawer. They're there though and if the parents are giving them to teachers, you can guarantee that they have them at home as well.

Secondly is the fact that companies actually specialize in selling these sticks. 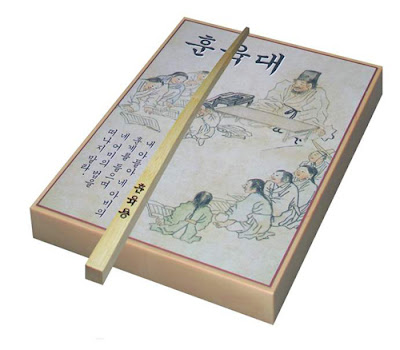 Look at that picture. It's actually not the official "love stick", but rather a "discipline stick". The very fact that these are being sold is a pretty huge indicator that it's still quite prevalent. However, not all parents spend money on these sticks. Some make them themselves and force their kids to take pictures with it. 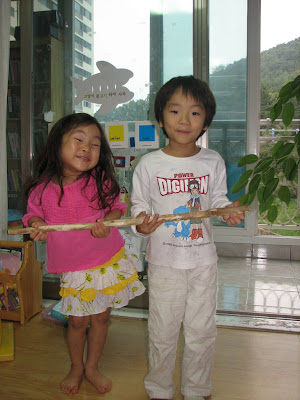 I have yet to find more than a handful of adults who have not experienced some sort of corporal punishment from their parents. Some got popped with a shoe horn and others got the ladle. Without jumping into Confucianism in Korea (which really tires me out), let's just say that it's what today's parents learned from their parents, so they do the same thing to their kids. Stuff Korean Moms Like has a more playful take on the whole thing as well.

Face it, many of us have been victims to some of the classic forms of Korean Mom punishment. Whether you were forced to kneel and carry a large bucket of water above your head for hours at a time, told to go and collect your own whip/switch from the backyard, or simply stand with your hands in the air, just know that the worst is not yet over my friend. You can never outgrow Korean Mom punishments. As long as she is able bodied enough to wield a tree branch, a rice paddle, or raise her voice, she will punish you.

I assume that in twenty years, this too will be a thing of the past. After all, Jesus started it. I must say though, it's easy for me to shit all over Korean parents for this practice, but the truth is that it's not limited to Korea. Sure, the love stick seems to be part of Korea's "unique culture" and we "must understand", but American schools did the same thing as did parents. I wasn't ever hit or spanked by my parents, but I do recall my mom threatening to "wash my mouth out with soap" every time I brought home a new bad word from school.

I think the best way to get this practice to stop is for the Korean media to publish these results.

Visit msnbc.com for Breaking News, World News, and News about the Economy

If only we could tie-in lowered 수능 scores then I'm certain the abuse would stop.

In the end, it's more about the lack of a nurturing environment at home that usually accompanies this type of discipline. The abuse is just part of a whole range of parental failures and hopefully the next generation of Korean parents will pick up the slack.

Good post. Back in July I linked to a pair of blog entries from a teacher who had all kinds of pictures of the "love sticks" his coworkers were using. :
*http://edvenchers.blogspot.com/2007/07/love-sticks.html

My, um, favorite is the plastic baseball bat.

Sorry, I meant to include a link there, not emphasize in July. A rather boring month in Korea, because it doesn't feel like summer since we're still teaching.

And yet, if a foreign English teacher smacks a kid's hand, that's cause for a full-on investigation...

Whatever forms of corporal punishment are being used, the authorities are clearly looking the other way, only caring when it's taken to the extreme or there's some evidence of the act...

As for the companies selling these things - people make what people will buy. You tell me you'll buy a neon pink shirt that stretches over your 400 pound body and I'll make one to sell you. Good luck getting THAT image out of your mind...

What scares me is these kids growing up, having kids of their own, and continuing the cycle.

I don't think they will. Young adults these days seem really keen on breaking many of the habits their parents practice. Time will tell.

Expat, I have to disagree with your assessment here. I am a huge fan of corporal punishment (but only used judiciously of course, not indiscriminately like some extreme cases that you describe.) Labeling judicious corporal punishment as an "abuse", to me, is an overstatement.

In fact, I strongly believe that the increasing lack of corporal punishment in Korea (as well as the total lack of it in the U.S.) is making children far too soft and self-centered. My fiancee and I agreed that when we have children, we will not spare the rod at all.

I view corporal punishment as something teacher/parents do when they run out of ideas. It displays a lack of expression and patience.

Korean kids are becoming more self-centered because too many of them don't have any siblings and their parents give them everything.

Don't get me wrong, a pop here and there is one thing, but I think even you would agree that the level of its public acceptance here suggests that it's probably used more indiscriminately than we would like to imagine.

Spare the rod, spoil the child.

I firmly believe what my parents believed when raising me. Until I was old enough to have a privelage that could be taken away, I was spanked, whipped, and backhanded occasionally when I was being a little shit. Yes, abuse occurs, but I'm not going to succumb to being ostricized for whipping my kids.