Hi, I was wondering if you could give me some information about the city of Ilsan. I can't seem to find a lot of pictures, or detailed info about the city. I will be teaching at Modang Elementary School, and I have no clue where in Ilsan that is located. Could you help me with a little info about the school and city?
Thanks!

Yeah, sometimes it's hard to find info about smaller cities and even harder to get some solid details about a specific school, especially a public school.

Ilsan is a nice city. It's located just northwest of Seoul in Goyang city which is in Gyeonggi-do. 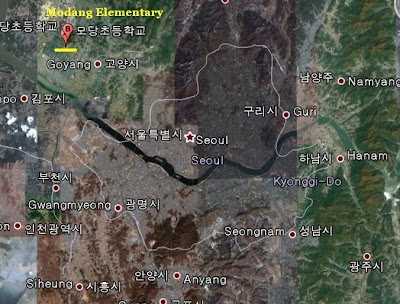 While it might appear to be far away from Seoul, it is actually pretty close. If you take a cab or a bus then your travel time might go up (depending on the time of day or night), but luckily you are close to Line Number 3 or the "Orange Line". To get to the center of Seoul from Daewha station (the closest station from your school) takes around an hour. Again, that sounds like a lot, but an hour on the clean subways in Seoul flies by. (Night spots: Hongdae- 66 min; Gangnam- 78 min; Itaewon- 67 min; Apgujeong 62 min) Click here if you want to play with the travel times. Late night cabs will be faster and probably set you back 15,000 - 25,000 won. Split that with a few friends and you'll be fine.

Still, your school is walkable to Daehwa Station. 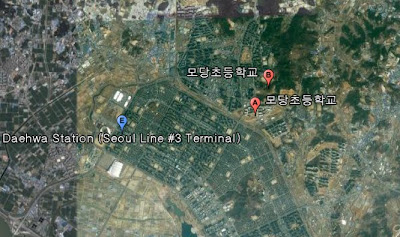 As an additional bonus, Daehwa is relatively close to Jichuk Station which also serves as a platform for Korail in case you want to leave Seoul and visit the countryside.

Now, let's take a look at Ilsan itself. If you look online, you'll mostly read about how new it is, that it has KINTEX (a convention hall) and of course, it'll mention the Lake Park or how it's name is "The Garden City". 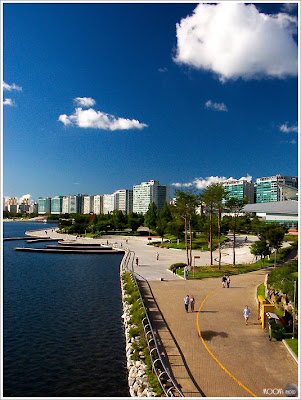 The lake is nice, clean and from what I hear, it's a good place to take dates. You can also do some biking, skating or jogging there, but beware of sunny days because it will be swamped with bikes, strollers and young people on first dates. One of the benefits of Ilsan is that it was a planned city. Unlike Seoul, Ilsan knew where it was sprawling and planned for it. The bus stations are spaced out well, the subway stations are new and the overall allure of the city is much more modern than other satellite cities.

Ilsan has a nice mall called Western Dome or La Festa which boasts tons and tons of restaurants, western shops and even an IMax movie theater. There's also an E-Mart (Korean Wal-mart) for your basics and a Costco for some of your Western food cravings. Here's a map. 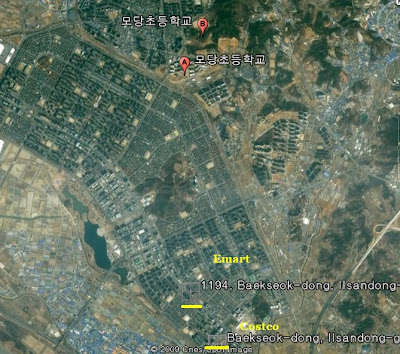 Ultimately, Ilsan has everything that most major cities in Korea have and you should have no problem adjusting.

Now, on to your school. You already know the location in relation to Seoul and Ilsan in general, so let me try to give you some details.

You can visit the website, but if you don't know Korean then it will be of little help and to tell the truth, the website doesn't give much useful info anyways.

I did find what I would call the school's alma mater roughly titled, "Brighter, Clearer" although that is totally useless as well. Your class size is probably going to be in the 25-35 range. Each grade has 3 different classes who move from class to class together.

There is a preschool, but luckily, you won't have to deal with them.

There is a teacher there named Mark. You can also contact him on his personal web page. I would recommend this BIG TIME. It's always nice and very smart to discuss the inner-workings of your prospective school. He'll be able to give you more info as well.

You can also connect with some other people in Ilsan here, here, here or here.

In closing, the area where you'll be living is nice, quiet and close enough to the action of Seoul, but far enough from its stress.

If anybody has any questions, just send me an email at asktheexpat@yahoo.com or leave a comment.
by The Expat at 12:36 PM

Thank you very much. I've been teaching in Tanhyeon for almost a year and I had no idea where the Costco was. Probably because I didn't look hard enough, but this made it really easy.

wow...your answers are so detailed and informative...a little too informative. how on earth did you find out about class sizes? i applaud your site and research skills, but i'm thinking you might work for the CIA.

Hey all, if you want to see photos of Ilsan (where I live) or read any ramblings about my photography exploits in Korea, check out my site. I post a lot of photo muse, news, and reviews at my photography blog: http://blog.aaronbrownphotos.com

HI, i have a question.... is there a local immigration office here in Ilsan city? Its kinda not fun cuz its far going to Seoul immigrat.office every time if u know what i mean. and if there is one does anyone there speak English? thanx

For most immigration/visa needs, you'll have to go to the office in Seoul. I hate it, too.

The one in Uijeongbu is pretty far for you.

Ana, there is an immigration office on the street to the right of "Meat Street" in La Festa. If you're walking down La Festa (towards "Meat St"), and you pass the main street with all of the taxis, turn right and go down the next next street heading in the same direction you were going. (Sorry I don't know if it's N, S, E, or W). You will walk by a building that says job center; this is it. The immigration office is located on the 5th floor. I don't think they speak a whole lot of English though and I've heard mixed things about their hours, but I was just there today (Tuesday) and they were open until at least 5pm. If you pass a weird looking mushroom/cloud statue, you've gone too far but you're on the right track and the immigration office is located across the street and kitty-corner from there. Hope this helps!

That has been one of the most through answers I have ever heard.

Hello, does anyone have information or comments about the KidsCollege in Ilsan? I'm interviewing there soon for an ESL position and would like to know more about it. Thanks.