Here's the question (or request in this case):

I'm interested in finding out where things [in Namyangju] are (cool must see sites..artifacts...historic locations...traditional South Korean
outfits.....western foods....other than junk food....Mcdonalds....maybe even a
supermarket). I'm trying find my way around.....and figure out who the potential
good friends are.

Namyangju is located just northeast of Seoul in Gyeonggi province. It's also conveniently nestled right next to Guri which is pleasant city full of great things to do, but let me focus on Namyangju. 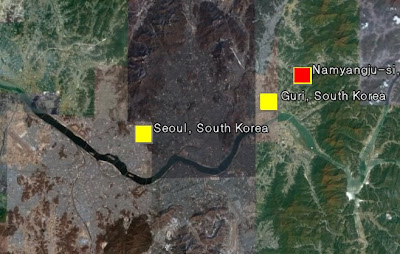 Namyangju is pretty large and since I don't know where in the city you live , I'm going to have to use the marker that Google Earth provided. As you can see you're pretty far outside Seoul, but close enough that traveling to the city on a weekend wouldn't be a big deal at all. It's only 30 minutes to Dogok station. That being said, there's plenty to do and see in your area that traveling to Seoul isn't even necessary outside of the occasional urge for non-Western international food.

As I often do, let's start with nature in your area and I'd like to point out that you picked a wonderful area for such escapes. The most famous recreation area in Namyangju is the Natural Recreation Forest at Mountain Chungryeong. It's full of great landscape, dense forests and beautiful valleys. The park also has forestry fields, sports facilities, pools, camping grounds, nature observation areas, and is a great place for both relaxing family vacations or a mountain hike. If you're into that sort of thing and want to book a cabin or reserve a camping ground, call 031-592-0681. I called them and found an English speaker there as well.

Gwangneung Forest is also located in the area. This place is the best natural forest in Korea because of its "treasury of mountains and forests, as well as a fascinating mix of animals and plant species. The Gwangneung forest, has a total of 841 different sorts of plants settling in the forest with 75 families and 244 species of vertebrates which include 19 kinds designated as the precious natural treasure and 22 kinds designated as the rare animal. Among all of the birds living in the forest, the most famous is the Korean redheaded woodpecker."

You can also check out Mt. Chuknyeongsan Recreation Forest.

Besides those spots there's also a ton of other neat places are sure to keep you busy for many, many weekends. You've got Mt. Cheonmasan, Mt.Ungilsan [Sujongsa Temple] and Mt. Suraksan for some hiking. There's Bukhangang River where you can hike, pincic and do some water skiing. There's also an annual festival that features crafts, music and other cultural festivities.

While on the topic of skiing, you can hit the slopes in the winter months at Mt.Cheonmasan Ski Resort and Seoul Resort. For rental fees, check this out.

For all other tourism related info check out Gyeonggi's tourist site, Namyangju's site and even Guri's site. I'd spend some serious time on the Namjangju site though. It's loaded with solid info. In case I forgot anything, take a peek at this site as well.

Now, on to the other stuff...western niceties. One of the only challenges you'll face living outside of Seoul might be the inconvenience of getting food that you want when you want it. As you get used to Korean food, you'll slowly assimilate and your taste buds will change, but when you're really hungry, sometimes Korean food just doesn't cut it.

So, what are your options? Let's start with Costco. Depending on your location in Namyangju, there is a Costco relatively close to you. Here's a bigger picture. You'll have to pay 35,000 won for a one year membership and then you'll be fine on at least some aspects of western cuisine at home. For restaurants, I would take a look here. There seems to be a pretty good amount of eateries for you. There appears to be one western bar called Oddysee Bar. I don't know anything about it though.

As far as making good friends, I would suggest you get out there and start traveling. Check into Adventure Korea. They're always up to something.

This was awesome. You gave me a ton of useful information. Thank you for taking the time find this stuff. You rock!

Im heading out to Namyangju in a week. I found your information very helpful and i wanted to thank you for this post!

Nice information.Have a medicine website. there is a medicine that seems to work. What you feel inside reflects on your face. So be happy and positive all the time.