Hey, ive been in korea for 2 months now and havent been able to find a website that lists concerts in the country. Do you know any good links?

Excellent question and one that I was very frustrated with when I first arrived. Most of your favorite bands who happen to be doing an Asian tour will likely skip over Korea or will play at odd times. I remember when Prodigy came here a couple years ago and their set time was supposed to begin at 3pm on Thursday. It's unfortunate, but the market is just not big enough to attract most musicians. The music scene in Korea is awashed with very carefully manufactured pop music, so easy access to online resources and concert posters for everything else is something that is a little harder to come across. However, there are a few solid resources.

Depending on your musical preferences, there should be something out there for you. For instance 02 Pro lists big names of DJs coming to Seoul. The artists will more than likely be playing at popular clubs in the area, so you can always visit their websites as well. However, if you're looking to see some live tunes or are in search of a more diverse array of music, you'll probably need to head to Hongdae. There, you can find the occasional concert poster or some sort of flier detailing venue, time and artist info.

You can also check out Broke In Korea for "punk, ska, oi and other underground music".

I like to use Korea Gig Guide for the most part though. It's easily the best Korean gig site because it not only lists international acts, but it also lists good expat bands and non-K-pop Korean bands. There's also of forum (although a little weak) and map of venue locations in Hongdae for your convenience. 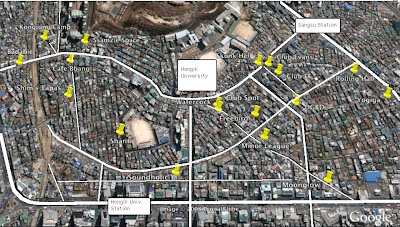 Most of the shows listed on the site are in Hongdae and quite a few genres are represented. You'll find punk, rock, metal, hip-hop, trance and house. For the most part, however, you will not find many jambands making the trip to Korea. I mention that because it happens to be my preference, but every time I check Jambase, it yields nothing for Korea. As frustrating as it might be, Japan seems to attract loads of bands, so for the really dedicated followers, a trip to Japan might be worth it. And honestly, Asia just isn't a big destination for Western acts, so if you're a dedicated music fan, be prepared to try some new sounds or get ready for a big break from live music.

I should mention that Korea does have a couple annual events that always attract Western acts. The World DJ Festival in Nanji-do, Seoul takes place every year in early May. This is a great show because it's an all-weekend thing and there is camping at Nanji campgrounds. Click here, here, here, here and here for some videos.

The other major Western music festival is The Pentaport Rock Festival (Wiki here) in Incheon. The original aim of the festival was to attract major names that had just finished playing at the extremely popular Fuji Rock Festival to Korea, but have had limited success.(My favorite band, Umphrey's Mcgee, played in 2006 and Disco Biscuits are playing this year.) In fact, each year produces less and less quality international artists. 2009's lineup has not be released yet, but I'm not expecting much. Still, it's a big festival, a lot of fun and some people really love it.

While Korea might seem like a black hole for international acts, it's not. There have been some major acts perform here (Eric Clapton, Oasis, Beyonce, Jay Z, etc...), but in the end, it's a country where there are very little counter-culture elements and yet they still manage to have a full line-up of relatively unknown bands and musicians headlining every night. It might take a little while to get adjusted, but there's never a shortage of tunes to be heard.

If anybody has any questions, just send me an email at asktheexpat@yahoo.com or leave a comment.
by The Expat at 3:55 PM

I've recently started a blog, the info you offer on this web site has helped me greatly. Thanks for all of your time & work.