Snow Days and Snowmen in Korea

I understand that Korea does not have snow days, but do Korean kids even play in the snow or do their parents make them study?


You're right that Korea, like many northern US states and Canada, is not really into snow days. Being from Tennessee myself, I enjoyed countless snow days (and cold weather days) and still get a bit nostalgic when I see the flakes coming down, but since Korea does not have a public school busing system, there is no need to call school. If you can't make it in, then you have a personal snow day. Franchised hagwons that use buses typically will have a snow day every now and then. If you're teaching adults, well, then you're open no matter what.

The second part of the question is more curious though. Of course Korean kids play in the snow and of course their parents allow it. While I'm sure that some parents might force their kids to study or play inside, the vast majority of the kids are outside playing.
If you're based in Seoul or any other city center, then you might not be able to witness that much playtime, just like you wouldn't in Chicago, New York or Boston, but they're out there.

Sledding, whether it be on hills or iced streets (my personal preference), is pretty tricky since every city is packed with people and cars. In Seoul, I saw a sledding ramp in one of the Han River parks that was packed. Some of the amusement parks have ramps as well.

Building snowmen (눈사람) is more interesting to me. For those of you who have taught children, I'm sure you already know that in Korea, the snowman doesn't consist of three parts like their Western cousins. 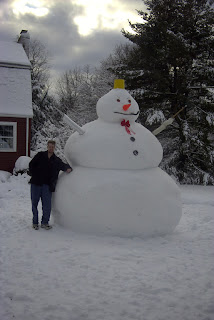 Rather, the Korean snowmen boasts only two parts: a head and body/legs. No midsection for Korean folks. I asked my wife why they went with the duo and she said because a snowman's legs are too small to merit an additional snowball. Who knew? 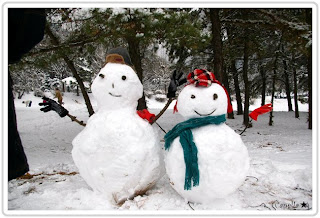 Another thing that I found interesting is what is used to decorate the snowman. From what I have discerned from conversations, photos and experience, there are no carrots, pipes or buttons used on the Korean snowman. A stick is typically used for the nose and arms. A pine-cone or rock might make its way to the eyes and a pepper was, at one point at least, the acceptable adornment for the mouth. I personally prefer the Western-style snowman made in the image of Frosty

, but it really doesn't matter.

I'd like to add that my opinion on snow and the excitement that I get from it stems from my region/climate. As I mentioned, I'm from southeastern US. We got snow regularly, but not heavy accumulation like they did up north. If the snow neared 2 inches or more, school was called. Sometimes they even called it preemptively. I remember there was nothing more exciting than going to bed, knowing that it was supposed to snow. The very real possibility of having a snow day usually kept me up well after the lights went off, but the sheer bliss of waking up to find the entire neighborhood blanketed in snow was one of the great pleasures of being a child.

That enthusiasm and hope for more snow still remains with me today. Sure, I get irritated by dangerous roads, perilous sidewalks and the fact that the world doesn't actually stop operating when it snows, but that southeastern child in me still is hoping for more snow. This feeling, however, is lost on people from colder/snowier climates and that's too bad because the innocent joy of snow and a snow day is as just about as good as it gets.

Has anyone seen any good snowmen or sledding sites on the peninsula?

A snow day for 2 inches!!!! You can sweep the snow away at 2 inches!!! I was born and raised in the Midwest (Chicago, Minnesota, Wisconsin). So, I can't even imagine a winter where 2 inches is considered a snow storm. On the same note, all the recent snow here in northern South Korea has really helped me not miss being at home with my family as much...but, of course, the holidays don't help.

Just like we saw here in Seoul, many drivers in the South aren't used to heavy snow, so it was better to play it safe rather than having all of those students/parents/buses out there slipping all over the road.

Plus, considerable accumulation of any kind was so rare that canceling a day or two wasn't an issue. I do remember, however, that in '94 and again in '95 we missed over two consecutive weeks of school. That was excellent.

Middle Tennessee just experienced the blizzard of '010. School was preemptively canceled. Snow accumulation was...wait for it...an inch! Maybe. Granted it was hell of cold and the streets may have been icy especially on rural county roads. I too remember the ice storm of the 90s. That was fantastic. We even lost power for four days. I wish I had still been in Seoul to witness the recent snow. Last year was freezing but not much snow to speak of.

The ice storms in the 90s were amazing. We had to move into a hotel because we lost our power for a week.

I would like to introduce our site for Super Bowl Commercials 2012 and Super Bowl 2012 just check it out.

do they drink hot chocolate?