Where to get the best food-free drink in Gangnam

I'm a drinker. I admit it. I like all the boozing that Koreans do, but frankly I'm sick of buying food when I want a damn beer. I live in Gangnam though and can't seem to find many places that allow me to get a few rounds. I read that you lived in Gangnam, so any ideas?


I do live in Gangnam and I also enjoy the sauce every now and then. It's odd to think that a drinker surrounded by heavy drinkers would have any problems, but I feel your pain. I personally hate hof food and would rather drink at a Family Mart than be forced into buying that slop.

Family Mart is a great warm weather spot, but it might not be the atmosphere you're going for. There are a lot of places in Gangnam to drink, some expensive and some, well, they're all pretty pricey. Rather than naming all the places to drink, I'll give you my personal favorites.

Everybody knows about the 3rd floor Woodstock near Pagoda Tower, but not as many know about it's cousin, Woodstock II. It's located on the other side of the main road. It's a basement place, but it's got beer, cocktails, shots, darts, great music and much more room than the other Woodstock. The best part? They don't play any music from the 90's and beyond. In fact, the barely get into the 80's. It's all 50's-70's classic rock/pop. They've got it all and a reasonable drink menu. 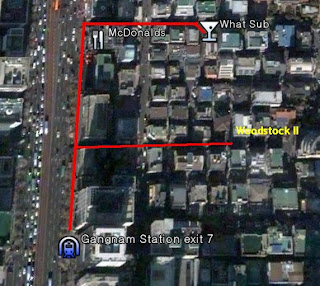 It's the best place in Gangnam and my personal favorite. Why? They have cheap shots and cheap beer. I'm talking two-dollar tequila shots. They also have a bunch of imports and cocktails. Unlike Woodstock, the crowd is 90% Korean. It's small, crowded, has a big screen for music videos and is a lot of fun. Go there with a smaller group though because it's sometimes hard to get a table.

Anyone care to add their favorite?
by The Expat at 9:08 AM

I love woodstock. They play good music. You can request nearly anything you want and they have it.

Which one do you go to? Have you tried Woodstock II?

Woodstock II (Yeoksam-dong, up the hill) is the place to go! Great music, especially when they bring out the vinyl (on request), great people. A bit hard to find, but totally worth it.