My wife and I made it back to Korea late last night. We were originally going to spend a few days in Tokyo, but the US trip proved to be more tiring than we had anticipated. We picked up my dog at the Bau House today and are slowly unpacking and getting used to the time change. I intend on picking the blog and podcast back up this week. I'm hundreds of emails behind as it is though.

Rather than digging in with replies, I thought I'd write this up instead.

Being abroad for so long has certainly altered my perception of my own country and at times I've found myself treating Korea as if it were my own nation. Many of us have. Of course my wife, her family, my job and this blog have only contributed to that, but I still always tried to stay very connected to my culture and country despite my enthusiasm for this peninsula. This trip, however, made me realize that I am very much American and only a temporary guest in this nation and I like it that way. Sure, I'll continue to come back to Korea over the year with my wife and eventually with our kids, but I have invested so much time and energy into Korea that it allowed me to ignore so many of the wonderful parts of my very own culture. Maybe I'm getting older, more tired, or more married, but perspectives change as we come to treasure different things. And at this point in time, I treasure my wife and dog first and foremost. That focus has its own implications, some known and others not, but it does mean that this will be my final January in the country. My wife and I have decided to make the leap and make 2010 (however much of it we make it through) our last in Korea.

On our trip home, we drove a lot. I wanted to do it this way. Driving is the best way to experience any country and my wife hadn't been west of Oklahoma/Texas, so it worked for both of us. 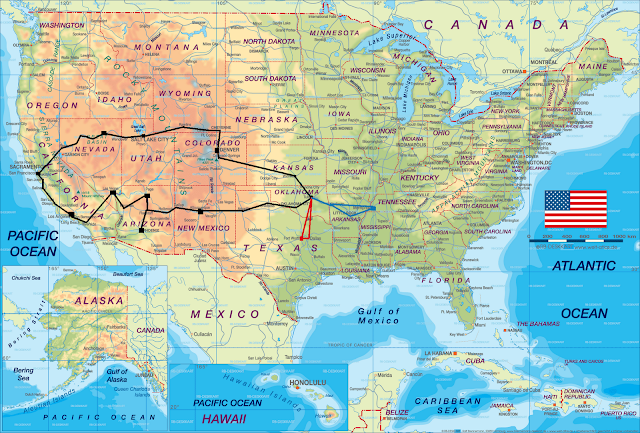 As you can see, we drove everywhere. The black was the first trip which took us from Tulsa to the Grand Canyon, over to LA, up to San Fran before a dash through the blizzards in the Sierra Nevada's which lasted until Wichita. The red was a quick dip down to Dallas to vist a former teacher and the blue was a pop-in on some old family. It was an amazing trip that I'll detail on another blog, but I re-learned a few things about the USA that I thought I'd share.

Welcome back. And welcome to the list of people I know, or know of, who have decided this is their last year in Korea. Must be something in the water. ;)

Glad you had such a great trip back. I'm scared that any prolonged visit home would result in my staying there. Though I am still loving my time in Korea there is so much to miss about home.