Gambling in South Korea: Who can do it?

Is it true that only foreigners with passports are allowed to gamble in the casinos?

That is true. Koreans are not allowed to gamble in any casinos except for Kangwon Land in Gangwon Province. So, if you hold a passport from any other nation you will be granted access to the casino. I've heard that in a couple places, they will allow you to enter with your ARC, but bringing the passport certainly wouldn't hurt. You don't want to get turned away, especially if you made a road trip out of it. And you'll have plenty of options since there are a lot of casinos in Korea. I, on the other hand, have not been to any outside of Seoul, so I can't vouch for their quality or atmosphere.

I have talked to many Koreans about this issue and have asked them why it is illegal for them to gamble in casinos in Seoul. After all, many of them also go to the Horse Racing tracks, play the lottery, gamble online, play the slots or maybe even a friendly low-stakes Go-Stop game. It doesn't make a lot of sense to me or them as I have yet to get a cohesive response. Most of the responses tread between tax liability and licensing, but all of them are vauge shots in the dark. But alas, I found some direction or at least some laws.

In principle, any gambling activities (or speculative activities) are prohibited in Korea. Article 246 of the Criminal Act punishes a person who gambles or bets for the purpose of gaining property by a fine of not more than five million won or a minor fine. Article 247 of Criminal Act prohibits opening of a gambling place for a profit and punishes a person who violates this provision by imprisonment of not more than three years or by a fine not exceeding twenty million won.

However, Korea has allowed certain gambling activities to be operated in the nation under restricted circumstances (e.g., promotion of public welfare, tourism) pursuant to special laws enacted.

The example provided in the second paragraph reveals why Kangwon Land is open. Gangwon-do is a poor province. By allowing a casino to operate there serves as a "promotion of public welfare" AND "tourism". Two birds.

Under the Special Act on the Assistance to the Development of Abandoned Mine Areas, Gangwon-land casino located in abandoned mining district in Gangwon province is presently the only casino that Korean citizens may enter. Obviously, this casino is located in a very remote countryside to restrict access by Korean individuals, and there is no casino located in an urban area.

The area near Kangwon Land used to be a heavy coal-mining area, however, most of the mining industry closed down in the 1990s leaving Gangwon with the task of creating new jobs for the miners.

So, they went from this: 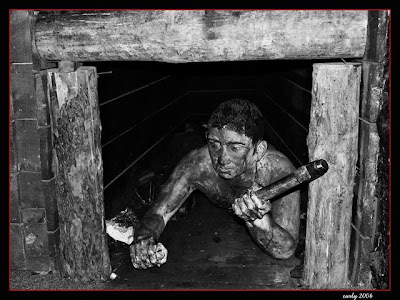 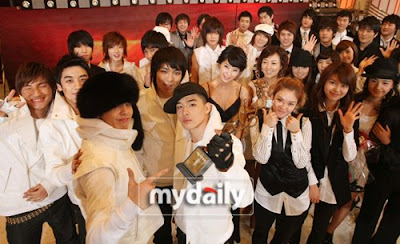 Pretty big change if you ask me. If you really love (or are interested in) Kangwon Land, make sure to drop by its Google Finance site for the dirt on how well it's doing. Hint: The current economic climate hasn't been kind.

If you want to know how Koreans can visit the other gambling establishments and venues (like Horse Racing), then click here for a detailed wrap-up. I found this quote interesting though.

Obviously, this casino is located in a very remote countryside to restrict access by Korean individuals, and there is no casino located in an urban area.

Why is that obvious? It's not to me. There doesn't appear to be very many moral qualms about gambling in Korea since there are so many legal alternatives. The government allows gambling in the nation to promote tourism and while I recognize that Seoul is a huge city and that maybe the tables would be filled with Koreans every night, it makes me think of Las Vegas. After looking at the Airline Passenger stats, it's pretty clear that domestic travelers account for more than ten times that of international travelers. Imagine a Las Vegas with a measly 200,000 international tourists rather than the nearly 4 million American it takes in monthly. Would Las Vegas be a tourist destination? Of course it wouldn't. No one would have heard about it.

I guess the rub is this: Does Korea want to be a hub of such activity? If yes, then I would suggest opening its casino doors to citizens and thereby creating a name for itself. It doesn't have to be in Seoul or Gyeonggi either. Throw a few in the Jeolla Provinces. Spread them out. If this whole thing is in the name of tourism, then they need to play the game.

If they don't want to increase gambling tourists, then so be it. Keep the doors closed, but this "No Koreans" policy begs the question: Is the government worried about the self-control of its citizens?

So, to answer your question simply: Yes. In every casino, but Kangwon Land, only foreigners with passports are allowed to enter.

If anybody has any questions, just send me an email at asktheexpat@yahoo.com or leave a comment.
by The Expat at 12:51 PM

hi, nice article.
by any chance, is there news saying the gambling is going to open to local in certain area?
I tried to search that news clip.
thanks

By "local" I assume you mean "Korean" and I don't think there has been any discussion of that.

Judging by the reaction that a recent gambling arrest got in the media, I doubt it'll open up to the locals anytime soon.

Thanks for the updates,
got some idea now.

I'm not sure this law still stands. When I was in Busan a few weekends ago my friends and I went to a casino in a hotel. There were tons of Koreans in there gambling away. It was pretty big and ritzy as well so I'm sure if it was against the law the police would have shut that place down by now.

is there an official ressource of the criminal act online (in English) where I can find something about the article 246 & 247? By official I mean a government site or equal.

I'm not sure this law still stands. When I was in Busan a few weekends ago my friends and I went to a casino in a hotel.
thanks for sharing...
www.golden-slot.com
gclub
GCLUB CASINO
gclub online

Yup, the Paradise Casino in Haeundae. I highly recommend it, but plenty of Korean gamblers.

Interesting, had no idea NYC outlawed gambling long ago!