The "Seal Men" and Beggars in Seoul

Who are the men laying prone on little rolling carts, with their non-functioning legs wrapped in what looks like inner tubes?

This is the second part to a Handicapped Beggars in Korea post. There is little or no reliable information about these people on the Internet. There have been no major news stories or articles written about these people. The information I have gotten is from two government officials, a former Songpa-gu police officer and a rumored, but unconfirmed KBS TV report several years ago.

I'm an early bird and live on Gangnam-daero. I get to see it all on my early morning strolls with my pup: late-night partiers still rockin' it, early-morning street sweepers, pools and pools of vomit and, on two recent occasions, a mysterious unmarked bus with tinted windows. The people who are on these buses, the "Seal Men", are the focus of this post. 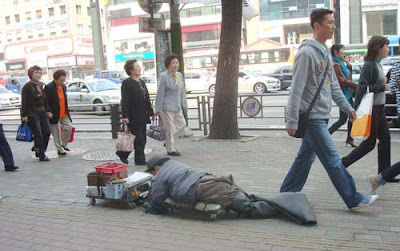 Somewhere between 6:30 and 7:00am on weekends, a bus pulls up, opens it's side-doors, and two or three men spring out carrying a handicapped man "with their non-functioning legs wrapped in what looks like inner tubes". They roughly set him up on a rolling cart, place an empty money-collection box next to him, turn his music on and drive off. In one case, the man, who was clearly suffering from severe mental retardation, was forced to lay there without assistance. Most of the time, these guys lie face-down for long hours in the hot summer heat while the busy feet and exhaust smother their view and air. The occasional passerby will lend a hand or maybe even buy them a cool drink, but for the most part, these guys fend for themselves while on the sidewalks.

I had a long talk about this with former Songpa-gu police officer who started his beat in Gangnam years ago. He told me that it was a scam. A scam, that I have since found out is ignored by the government. If you have seen Slumdog Millionare, then you kind of get the picture. It's about the same, but their "slaves" are adults who were already handicapped in some way.

It goes like this: A group of people somehow have gotten access to the mentally challenged and set up an operation where they drop these handicapped individuals off on different, but highly trafficked streets in the city, have them lie there all day collecting money and, once the evening has died down, they come and pick them up. Once picked up, the money is taken (usually less than 2o bucks) "to pay health care, food and housing costs" by the men in charge and the handicapped men are brought to a crowded apartment where they are given food and a place to sleep.

I want to be clear that I am only relaying information.

He said that in the 1990s, Korean gangsters were thought to be behind the operation, but I got the impression that he was not privied to such information. If you ask me though, I think it's a reasonable assumption. The Korean mafia is known for human trafficking, i.e. slavery and this would fit right into that theme.

The government officials were a little more vague with their knowledge except for the fact that they admitted knowing about the problem and hinted that by allowing the mafia or whoever is responsible for this to continue its operation, the government can stay out of it. On the surface, I guess it could be argued that these people are "working" during the day and, with the money collected, they pay for their living costs. Of course, only sick and twisted people would argue that. This is modern day slavery at least and there is no excuse for treating people like this. None.

Let's pretend that my three "informants" are all wrong and just lying to me. Fine, but it still doesn't change the fact that I have seen these people dropped off on the streets like animals only to sit all day without food, water, or a bathroom. This type of thing should not happen to the helpless. If they were just a little crazy, a tad mentally "off" or made the choice to beg, then that's their decision, but these specific men are clearly not in charge of making decisions for themselves. They are being pimped out by greedy hands and forced to endure endless days of deprivation without being given a chance to say "no". I'm sorry, but that's slavery.

I will continue to do more research on these "Seal Men" and hope that I can find some more definitive answers soon. Until then...
by The Expat at 5:55 PM

I saw this sort of crap all the time growing up along the Mexican border with small children spending their days panhandling instead of in school. At least I would see their handlers give them a small lunch of juice and taquitos every now and then.

Instead of handing over spare change, I usually give oranges to them.

Yep. I remember being in Cambodia a couple years ago when a mother came up to me asking for some money. I gave a little, but then I saw her walk behind a building, pass her baby over to a girl no more than eight years old who promptly ran towards me for a little more cash. I saw the whole thing, but still gave in.

While I usually give cash to people on the street, I think the mentally handicapped who are thrown out to panhandle for someone else deserve some extra attention. My concern is that I don't know where to turn.

Also an unreliable source, but I've heard that sometimes when people steal money from the "seal-men" they get up and run after the thief. These students are in middle school so it could be their imagination, but I'm sure they're right on that passers-by steal the money sometimes.

Kristin, they could be right. When I first went to the big city (Houston), I would go downtown to deposit my paycheck every Friday and do some shopping at the same time where I usually would encounter a homeless blind lady and her dog. Over the years, I must have given her over $100 before I caught her chasing after her dog in heavy traffic one afternoon. I don't know what made the dog bolt, but she was after her meal ticket dodging cars like a sighted person. I mentioned this to my bank teller and was informed that many of the so-called beggars on the street were making a very good living off the kindness of others. It seems that someone important must have seen her charade as well, as I never saw her in the area again.

So, it looks like we need to have a little stake out or try to steal the "seal men's" money. Not it!

The supposed gangster connection to the beggars is "common knowledge" in Korea, but that story's origins may have been in government efforts to get people to stop giving them money just as easily as it may be true (since the late 1980s or 1990s there have been services and programs available for them, aimed at giving them food, shelter, medication if needed, and a more dignified existence, though who knows how well that system works). Certainly, though, they are organized in some fashion, as you describe.

I would have a hard time imagining some of the "seal men" getting up and running after you if you stole, given them some of them — more clearly than in your picture — have no functioning legs or no legs at all.

I also would imagine stealing from them is much of a problem. Even if there weren't a fear that whoever is organizing them would come after you, this is, after all, the land of the untended throw-your-coins-in-a-box-on-the-ground-on-the-subway-platform-and-take-your-newspaper.