How bad is the pollution in Seoul?

In your personal opinion, how bad is the air pollution in Seoul? Sometimes I wonder if the pollution is overblown by expats from Canada or other areas where pollution is minimal. I am from a fairly large metropolitan area (Philly/Baltimore/DC)and just hope that some of these on-line opinions I read are just overblown compared to other areas that are quite polluted.

I like this question because it asks for my personal opinion. Seoul isn't particularly clean, but it is improving. The comments you read online could come from genuine posters or runners, bikers and other outdoor sports enthusiasts, but from experience on my ESL Teacher group over on Facebook, most of the comments are from expats and teachers who like to bash Seoul and Seoulites.

I remember reading about how I would become asthmatic after a few months in Seoul and would be ill most of the time. Not only have I not developed asthma, but I also am ill about a fraction of the amount I was in the US. You should ignore most comments and just look at the facts. Seoul is not on any "Most Polluted" lists that I can find. Seoul does not have factories or any other industry which produces a lot of air pollution. Seoul simply has too many damn drivers. If you're a little more into stats and comparative studies then perhaps a Google search would be best. You'll find all you need to know about the current state of air quality and pollution in Seoul. This picture, however, is something that I have never seen in Seoul. 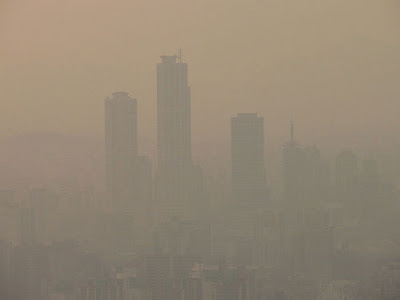 I know a few cyclists who really had a hard time getting in a solid exercise out of fear of inhaling exhaust and fumes. Seoul has an excellent public transportation system, but still has way too many cars. They're trying to get people to ride bikes more and even have an alternating-day driving program to reduce congestion and pollution, but the smog can get pretty thick on hot summer days.

If you live in a busy city-center, then expect some pollution, but Seoul is not significantly worse than other major world cities. In fact, Seoul has less particulate matter in the air than Busan and Daegu. You mentioned that you're from the DC area and from what I can tell, DC produces more air pollution than Seoul. The time of year also must be considered. Of course, you'll be in Korea for a minimum of a year, but since the winter months experience the greatest increase in pollution, the cold weather usually deters people from spending extended amounts of time on the streets.

I guess the main point is that pollution is a problem of course, but it depends on your lifestyle as to whether or not you let it become an issue for you. If you are a runner, then I suggest you get up early in the morning and beat the cars. If you are a cyclist, then stick to some of the rural trails. If you love the smell of grass and trees, then perhaps Seoul shouldn't be on your list. You are a gym dude, then it won't be a problem. And don't forget that you can always go the mask route... 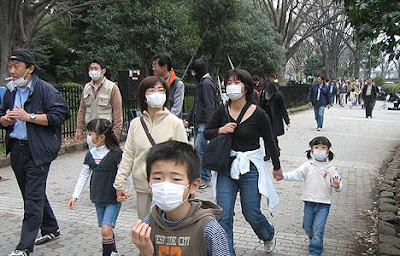 Anybody developed any illnesses or conditions as a result of the pollution?
by The Expat at 5:22 PM

I think you should have mentioned the yellow dust: in march and/or april, dust blows in from China's Gobi desert, and gives us a few days of really, shockingly bad, stay-indoors air quality (and due to deforestation there, wind erosion is increasing, meaning there are more days of yellow dust now than there used to be). I'm from vancouver and thereabouts, but the air quality has never bothered me too much, as long as I drink enough liquids.

I think the dust is greatly exaggerated. Never have I had any problems with it. All it does is leave my motorcyle with a thin layer of yellow-ish dust covering the seat.

I'll add it to the main post, but has it really been that bad for you?

The pollution and yellow dust seems to affect everyone very differently. I've never been bothered by it at all, even on its heaviest days, while I suffer in agony back in the states due to grass and weed pollens there. I guess the lack of yards and lawn mowing has actually helped keep my asthma under control over here.


Additionally, some newcomers sometimes mistake the heavy pine tree clouds of pollen in May as yellow dust. Luckily, Clarinex reports that “the highly visible yellow pollen from pine trees - including spruce, fir, hemlock, larch, and the true cedars - rarely triggers allergies. Although pine trees generate clouds of pollen, they do not usually trigger your sneezing and runny nose. “

I didn't know about the pine tree pollen clouds. Thanks for the info.

I don't have any allergies, but when the air quality warning is out, I have to sleep with a humidifier and I get tightness in my chest. Nothing debilitating, but enough to have an indoor plan B for the weekend. But then, it's only a couple of weeks a year.

I do agree that winter requires a humidifier. Otherwise, it's coughing all night.

It totally depends on the person. I didn't even know I was so sensitive to pollution until I came to Korea. Question, do you know of a website that monitors yellow dust levels in March/April?

I did have a problem with the yellow dust when I was there earlier this year. I got myself a transparent mask and it really works great! I got it in from a small bike shop there but forgot the address. However, the website is totobobo.com

I am no Seoul basher. I, in fact, love Seoul. However, I have to say that, coming from DC where I was barely ever sick, I am literally sick EVERY 3 weeks in Seoul. The air is disgusting because of all the driving and all the outdoor smoking that they refuse to regulate. I get respiratory infections often, and have resorted to wearing a mask outside. I have been here for over a year, so obviously I don't hate Seoul, but it's very clear to me that the pollution here is out of hand. My Korean native friends feel the same- and I have many of them. Not only do I teach here, I also attended university here. So, to wrap this up, yea the pollution affects everyone differently, but to say it's "not that bad" is definitely a stretch.

I also wanted to add that I had no allergy problems in the states. At the end of May, here in Seoul, I started getting itchy, watery, burning eyes.. How wonderful for me, that Korea does not really have allergy medication. Luckily, I have a caring boss who brought me some from his home country(he's from Canada), and a mother who loves me (package is on the way).

I am in Seoul, right now, looking out my window, at this very moment. The smog is so bad I can't see past about the third block of buildings, and I'm fairly high up.

I love Seoul, absolutely adore it, but the pollution problem is definitely NOT an overblown thing. Sometimes, when you're living in it, it can be harder to see.

I used to live in Incheon with my wife. She is from Tokyo, so she doesn't really come from a place where the air is particularly clean and pure. She is usually not ill very often but during the whole stay in Korea, she had serious lung problems, from allergy to asthma. She used to cough a lot. So maybe the air quality is not that great in Seoul's area after all. Actually, if you look at the OECD stats, Seoul is the most polluted city in all OECD countries. So yeah, people complaining about pollution in Korea are not necessarily haters...

Pollution here is not overblown. I just came back from the hospital becauase of an allergic reaction to Seoul's air... I was asked to stop using my contact le ses because my inner eye lids are terribly bad, all because of pollution. I love Korea, this is my second time here and I have been here for a month now. But I cannot say I do not suffer a bit because of the side effects of being here. Last time i got a terrible throat infection, and now I cannot bear wearing my lenses (in fact, i have been wearing ctc lenses for 6 years now)

Pollution here is not overblown. I just came back from the hospital becauase of an allergic reaction to Seoul's air... I was asked to stop using my contact le ses because my inner eye lids are terribly bad, all because of pollution. I love Korea, this is my second time here and I have been here for a month now. But I cannot say I do not suffer a bit because of the side effects of being here. Last time i got a terrible throat infection, and now I cannot bear wearing my lenses (in fact, i have been wearing ctc lenses for 6 years now)

Just left Seoul and Busan. Thought they were both pretty rough for air quality. Lots of sniffling and coughing while I was there for a few days and still getting over it a few days later. I am a little sensitive to smog, but not overly so. Air quality there would be an issue for me for a long stay.

I see this is an old thread. It's January 2017 as I post this, and I'm pretty confident that everyone reading this will agree that on a daily basis Beijing and Shanghai far, far exceed the worst nightmare post-apocalyptic smog scenarios Seoul can give. I feel like I'm living in a fresh-air environment compared to those two cities. That said, the brownish-gray hue above the horizon does look worrisome sometimes.

It's not going to kill you, but you are never going to walk outside and want to take deep breaths either. You'll definitely need a mask.