Chuseok Gifts and the Foreigner Experience

Here are the Chuseok-related questions:

Chuseok is coming up and I'm curious as to what exactly happens. I've discussed it with the Koreans I work with and while it's interesting, much of what they tell me centres around their family's traditions. What I'm wondering is:

- are there traditions that foreigners are expected to take part in? I've seen a lot of gift packages in Kim's Club and the like; are we expected to give gifts?

- what shuts down? Do the buses and subway run on a reduced schedule, or are they 100% closed?

- is it only family-based, like the Thanksgivings I'm used to back home in Canada, or is there a way to take part in a Chuseok tradition - for instance, a "Chuseok meal" in a restaurant?

I used to work for a hogwan and now I have a much better job teaching at an elementary school. My Korean co-teacher has been very helpful with both school stuff and non-school stuff like dealing with my apartment and setting up an new bank account. I was wondering what might be an appropriate gift to show my gratitude. Should I also get her something for Chulsuok? I should also get something the woman volunteer who helps out with the after-school classes. Any suggestions? What is the protocol here? And should I also get my Principal something?

Simply put, Chuseok is a harvest festival where Korean families gather together (usually in the husband's hometown or the oldest son's home) and celebrate the harvest, eat traditional food and pay homage to their ancestors.

First we give thanks and bow to the harvest (Spot the white guy!): 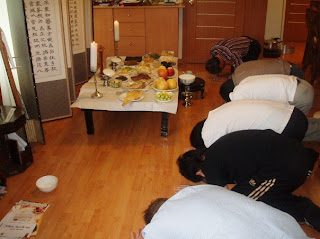 Then we offer it to our ancestors: 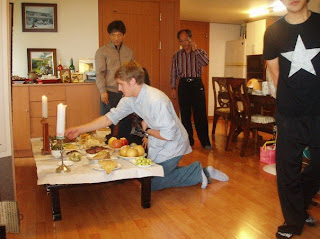 And after eating and drinking, we head to the tombs: 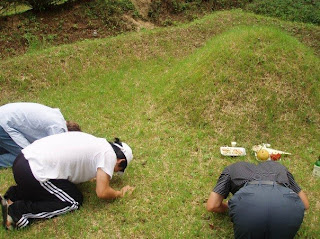 That's the ritual and just about as involved as any non-Korean will ever be in the holiday. Unlike myself, most expats here are not married to a Korean, so your participation is limited to enjoying quiet city streets (unless you live in a "hometown") or getting slammed by hours and hours of highway traffic. All public transportation remains the same though. You'll find that a lot of restaurants and stores are closed, but it's not that big of a hassle.

The gifts are part of the fun as well. Korea Times ran a piece today about parents bribing teachers for the holiday, but there are certainly less-tainted gifts that people exchange.

For an older person or boss, most people buy honey (the expensive kind) or a fish called 굴비. For someone close to your age or a colleague, it's pretty common to buy them some dried persimmon (감) or other dried fruit. Some people try to get away with the famed Spam gift set and even though it's presence in supermarkets might say otherwise, it's viewed as a little "low-class" or "out-dated" these days. For kids, you give them money. If you don't want to be that specific, deok is probably the safest holiday gift and very easy to find.

As far as your holiday plans, either plan a trip out of the country or book your train tickets now because you don't want to deal with Chuseok traffic.
by The Expat at 12:35 PM

If, as a foreigner, you get invited by a Korean family, by all means bring them some kind of gift package. Department store gifts (in department store brand wrapping!) are always appreciated, and are usually fruit, meat, fish, nuts, 김, or edibles of some kind. Gift sets of cookies, tea, etc. are often welcome. I have to second the "no Emart soap/toothpaste/spam set" for the class implications. Get the nicest thing you can reasonably afford. You do not need individual items for individual family members. You do not need to get anything for your boss or coworkers (though you might recieve something from your school or company.) If you're feeling especially generous, you could get something small for someone who has been especially helpful to you (co-teachers, secretary, etc.)

Money for kids isn't really a 추석 thing in most families . . . On 설날 kids get money for 세배, but only in generations below yours, and only if they bow to you.

A surprising number of shops and stores are open in Seoul, and transit runs as usual. Also, places like palaces and museums often have special activities and free admission during the holiday, particularly for people wearing hanbok.

It's been my experience that money is going around for both holidays, but I could be wrong.

I would encourage everyone to resist the urge to wear hanbok. Not really, but if you're in a visible enough place, get ready to be photographed and featured in a newspaper about how great Chuseok is for foreigners.

Thanks for the gift info as well! No gifts for then individual is a good point.