I am planning (the closer to departure stage) on going to Korea to teach English. My question is general and may be easy for you to answer. Martial arts in Korea-- which fighting style is most studied, are there experienced and wise instructors, if I began lessons, would I be around mostly children? Thanks for your help.

I assume you're very aware that Taekwondo is Korea's national sport, but you might not have known that is also boasts having the most practitioners around the world. Having taught kids for a couple years, I know that it is popular among that demographic and, in the past, most Korean men who completed their obligatory military service had to obtain a black belt while serving.

Former K-Blogger Amanda from Amanda Takes Off was really into the sport and I bet it wouldn't hurt to snoop around her site. From what I understand, she learned quite a bit of Korean from her classes there.

There are other Korean and world martial arts here as well and I'm 100% certain that all of them have classes for adults with skilled instructors. As much as I wanted to imagine someone fighting kids like Kramer did (video here), I don't think you'll have many problems. 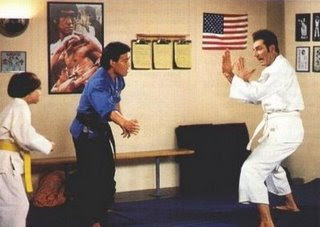 The other night, I was out having a drink with a co-worker and there was a very raucous table of Malaysians and Jordanians next to us. We joined in on the fun and found out that they were all Taekwondo referees and that they travel to Korea several times a year for tournaments and competitions. The Jordanian woman (whose name escapes me) at the table, although in her 40s now, was somewhat of a Taekwondo legend who became the first woman in Jordan to participate in the sport and is now the leading Taekwondo spokesperson for the Middle East. The point is that Korea is a martial arts destination.

Since I'm not sure where you'll be living in Korea, there's no need to suggest any dojangs just yet. Enjoy!
by The Expat at 5:51 PM

Hapkido is also popular (though Korean co-workers might say "but, why didn't you choose Taekwondo? Taekwondo is *Korean*") and you can most likely find adult classes.

Thanks for the shout-out.

Yep, you can easily do taekwondo as a foreigner in Korea. I've known people who have done it with very little Korean, but it does help (mostly with relations with other students and the teacher) to at least make an effort to learn some Korean.

With some hunting you can find adult classes. The closer your studio is to a university, the more adult there will be. The later at night the class is, the older the students will be. My studio was still mostly full of high schoolers, but they were good guys.

There's also gumdo, which is a sword martial art. Those studios are harder to find, but they do exist.

I ended up at a really, really good studio. I still miss Master and "my boys."

I've been training in Soo Bahk Do (previously known as Tang Soo Do) for over 10 years in the US. The organization that teaches the art worldwide is known as the Moo Duk Kwan. The founder of this traditional Korean martial art refused to join the Taekwondo bandwagon back in the early 60s and its popularity in Korea has declined markedly since then. In fact, these days you would be hard pressed to find a Korean that has heard of it. Due to returning servicemen (such as Chuck Norris) who trained in the art during their sojourn in Korea, it is now far more popular worldwide, particularly in the US, though still not as well-known as Taekwondo. Nevertheless, there are a few outposts of Soo Bahk Do Moo Duk Kwan left in Korea. My wife and I have been training at the central Moo Duk Kwan dojang near Sookmyung Women's University in Yongsan (Seoul) for the past year. They have adult-only classes (about 50-50 Koreans & Expats) on Mon, Wed & Fri nights. Knowing a little Korean helps, but you can get along fine without it. Check out http://soobahkdo.or.kr/ or http://soobahkdo.com/ for more info on the art.

I work at k16 airbase and am looking for a dojang that will train me .

Sildigra 100mg Tablet is utilized to treat erectile dysfunction. cGMP is a compound in the body that causes unwinding of vascular smooth muscles and expands bloodstream to different tissues. PDE5 is a catalyst in the erectile tissue of the penis, vascular endothelium, and retina of the eyes, which does the breakdown of cGMP. Sildenafil hinders PDE5 and accordingly increments the grouping of cGMP in tissues. Expanded cGMP cause vasodilation, which brings about the age and support of an erection.