First, I am a smoker. Not a cigarette smoker, but a cigar smoker. I am not an avid smoker...I can survive without cigars...but I would like to know how cigars figure into Korean culture. I've noticed that there are plenty of cigarette smokers around (all males, it seems), and I haven't noticed any kind of smoking ban (although no one seems to smoke in restaurants - thankfully). However, what I'm asking is: Does anyone in Korea smoke cigars (real cigars - not the ones from the convenience stores)? Does Korea have any cigar stores/shops? Are cigars expensive here (U.S. prices range from $5~$12 for a typical cigar)?

Smoking in Korea is pretty much second-nature. Korea boasts one of the highest numbers of cigarettes consumed per capita and cigarettes, despite being responsible for the rise in heart disease and lung cancer, have largely escaped the heavy tax that many other nations have levied in hopes of curtailing the deadly habit. 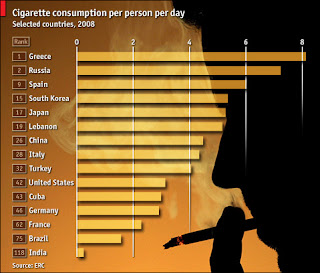 As far as most smokers being male, I agree to a point, but it is certainly becoming more common to see young women lighting up in the confines of a smokey bar or hof. Some of the bolder ones are sucking down on the streets as well. However, there are still a lot of rules and some taboo-elements when it comes to smoking in public. For instance, many Korean males will not smoke in front of their bosses. Of course, the boss doesn't care that their employees smoke, yet subordinates continue to file out the door and out-of-sight to light-up. Much like many Western families, it's also rude to smoke in front of family members. I assume that many of these practices will become obsolete in time. Further, I'm not too sure what restaurants you happen to be eating in, but I would be hard-pressed to find one that isn't cloaked in a thick layer of smoke. I guess most of the Western or "family" restaurants don't allow smoking though.

I digress. As you mentioned, nearly every convenience store sells some sort of cigar. They're usually pretty low quality and, from my experience with fellow expats who have been cajoled in quitting smoking cigs by their girlfriends, they smell rancid. However, I am not a connoisseur in any sense of the word. Luckily for us, some one else is.

The Seoul Cigar Aficionado Society, which may or may not be active anymore, offers a short list of spots to purchase cigars.

As much of South Korea's population lives in the capital, Seoul, it is easy to understand why Korea's only cigar shops are in Seoul as well. As of this posting date, there are only three cigar retail locations with a wide range of cigars to choose from.

For more detailed answers, email us at: SeoulCigarAficionadoSociety@gmail.com.

I wish I knew more, but there just isn't a big cigar-puffing culture here. I would suggest starting there and see what you come up with. Any cigar smokers out there care to take a stab?
by The Expat at 6:49 PM

I smoke cigars pretty regularly (2 or so a week, mostly at pubs), and have seen a few regular smokers at some of the pubs in Itaewon. I'll also smoke a cigar or pipe while walking along the Han River park or other public parks and no one has given me a hard time for it. I mail order my cigars, although having access to US mail on military bases makes this a lot easier, and there are also some decent cigars at the PX or the Navy Club on Yongsan. There is a decent cigar and pipe shop in the Hamilton Hotel shopping center (second deck, near the escalators).

Younger Korean friends (in their 30s) will occasionally try a cigar, but most of the regular cigar and pipe smokers are guys in their 50s or older.

Having a military friend is always nice and will bring allo sorts of hometown goodness your way. However, that can be a challenge for some (especially for those outside of military towns). I wonder though, if you can mail cigars to yourself, is there a problem mailing cigarettes? I ask because another questioner loves Pall Malls, but can't find them here. Any thoughts?

Also, the whole cigars = victory/success/wealth meme never really took root in Korea, nor did the I-want-to-be-like-my-father badassness of pipe smoking.

Well, all this info is going to be a big help...Thanks!
Also, I'm glad that the cigars=victory/success/wealth theme didn't make it here. That's not the kind of cigar lover I am.

I'm not too sure about sending cigarettes by mail. I know that by law, cigarettes can't be sold by mail, although cigars and pipe tobacco can. I'll look into whether or not private citizens can mail cigarettes to each other or themselves, though.

I had fun reading this post. The best part of this post is the graph of cigar users. I never thought that people in Greece has the highest consumption of cigar per day.

I love to smoke cigars and was in search of buying cigars online at reasonable rate.Do anyone have good place in mind?
Buydiscountcigars

I love this flavor of cigars. All my friends buy cigars of this category and enjoy every smoke. I think this is one of the strong and quality cigars I had ever smoked.

Looking for best buy on cuban cigars any tips my friends

VaporFi is the best electronic cigarettes supplier out there.