I'm a Muslim/UK citizen and interested in coming to Korea to teach. I saw a recent article about Islam in Korea and was wondering how I might be looked upon.

I assume by "recent", you mean THIS article (or this one) and if that's the case, I commend you on your reading of Korean papers before you make the leap. 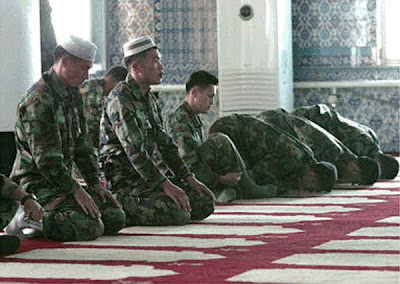 There's some, but not an overwhelming amount of decent English info on Islam in Korea. Sure, you can read Wikipedia (which I found pretty interesting) or some other "Islam in Korea" pages, but other than a few snippets in the news, there isn't much on how you'd be treated here. I'll try my best.

Since Korea has a pretty high number of non-religious citizens and religious persecution is relatively low (although Islam has a tendency to be tied to terrorism in the minds of many Koreans), I think the best way to go about this is to highlight the fact that non-Korean Muslims here are viewed as very foreign. As I mentioned in a comment on Diffism, there are different categories of foreigners and each one typically carries a certain reputation or stereotype.

You can pretty much break it down like this: Caucasians (teachers, military, government, contractors, business-types and tourists); Asian non-Koreans (laborers, cooks, nannies, tourists and "entertainers"); and other. The "other" is where many western-Asian/Indian/black or otherwise dark-skinned people would be categorized because many Koreans aren't sure where to put them. True, there are hundreds of black teachers here and probably thousands of dark-skinned contractors, businessmen and skilled laborers working here, but the average Korean just doesn't know for sure. 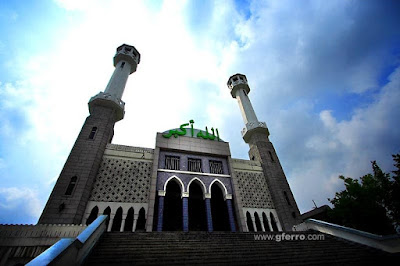 For instance, if an Indian fellow was walking with a bunch of Korean businessmen at lunchtime, it would be assumed that he's involved with business in someway, but if he was alone, it's pretty unlikely that he would be considered to be part of the business crowd. Another good example of this on Korea Beat today. The police refused to believe that an Indian man could be a professor at a Korean university. 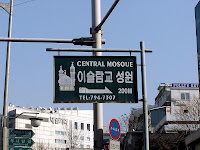 Since I don't know your race or ethnicity, I won't offer any simple race-relations tips, but if you were to wear an igal or a thawb, I can say for sure that you'd be given a few looks, yet I wouldn't expect anything worse than what you are used to in the West. Exposure is a huge part of tolerance and acceptance here and since the Korean Muslim population is very small (only a few mosques with 30,000-70,000 followers), the average Korean just doesn't have much experience to go on. You can largely avoid this if you live in Itaewon, but that might not be what you're looking for. I would suggest checking out the Seoul Central Mosque though.
The government is trying to promote closer ties as well. I think you'll be fine and might even find a nice little community to join if you felt so inclined.

September 26th, 2009: Korea Times reports on feuding going on within Korean Islamic groups over the misuse of donations.
by The Expat at 8:55 AM

Although not Muslim, I'd like to think that if you're comfortable with being stared at based on your distinctiveness, you won't be much different here. Of course, asking the local Muslims in Itaewon will be a lifeline for you to know how to deal with ignorant people (and not just Koreans!).

If there's one advantage, it's that they speak Korean and you don't - some Koreans won't approach you based on that distinction, while others will say stuff you can't understand... Ignorance, in this case, might be a small form of bliss.

I would also recommend to this guy if he decides he wants to come here and starts looking for a job to be careful what he looks like in his application photo.

He should avoid wearing any religious articles or accessories in his photo and be clean shaven.

Otherwise he might have a problem getting hired due to the horrible picture screening done by Korean schools.

Certainly. I've certainly been happy about NOT understanding what's been said to me at certain times.

Yep! That's a great point and one that I have previously recommended to non-Caucasians. You've got to play the game and -as much as I hate saying this- whiten yourself FOR YOUR PICTURE only.

I've never heard a Korean mention this, although I'm sure this is in the minds of at least some Korean. Ditto with Hawaii. However, I've heard many Americans on the US Mainland conflate Islam and terrorism as naturally as they would put butter on bread.

My point is that for all the bluster of Korean discrimination, anti-Muslim sentiment is a far bigger problem in the US than it is in the ROK.

My ex lived in Itaewon, so I hung around there a lot during the day, and it was easy to see Muslims wearing (what I would call) traditional garb, and they did not get many stares in Itaewon. Outside that area, I don't know.

Kushibo: You're certainly correct that mainland Americans make that connection much more often than Koreans. Additionally, I think that since so many Korean businessmen and even tourists visit countries with a high muslim population (Dubai, Qatar, Turkey etc...) there is a little more understanding.

However, take those Muslims in Itaewon and put them in a place like Daechi-dong or some other highly residential place and you'll see the accusations start flying. I know that isn't the fairest of comparisions, but then again, neither is comparing Itaewon and the rest of Korea.

On a side note: I was in Itaewon briefly yesterday and was pleasantly surprised by the diversity I saw even among the Muslim population.

I know this is a really old post but since I was looking things up as a Muslim interested in going to South Korea I just wanted to add something. I had a penpal from Jeju actually and when I told him I was Muslim....he didn't even know what it was.

Short of that you can find Umrah packages freely through internet searching but it isn’t 100 % sure that you’ll definitely get the cheapest one for yourself. Here we have offering the most relevant of your searches, get advantage without wasting your time. Now visit the www.qiblatravels.com

I agree with you.
I have this idea in my mind that Korea might actually NOT know that much about Islam, and maybe other religions in the world. I don't think they are taught that much on religion in school so many of them, when asked about Islam, I fear will not have any idea what the depth of it is so ignorance can be big. To top it off maybe the only image they have of Muslims is what they see on the media, which obviously gives a bad image