What's the weather like in Korea? All the travel books say that it's the same as Washington DC (I'm from Baltimore) and the seasons are about the same as well. What's the monsoon season like?

As I was reading the question I was really hoping that a "four distinct seasons" line would be in there, but I assume the season's comment was a reference to that. As most people do before coming to Korea, purchasing a travel book is always a good idea. And when you start reading it, an absurb fact that has been mocked over and over again for years and years among the expat community is revealed: KOREA HAS FOUR DISTINCT SEASONS. Despite that there is nothing unique about this weather pattern, Korea seems to like push the line. New K-Blog, Dong Chim, takes a nice shot at the claim here. 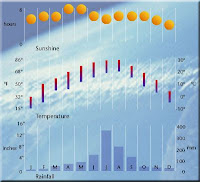 Unlike those guide books and even the graph to the right, I would say that Korea (or at least the northern regions) has closer to two seasons. The summers are long, wet and hot and the winters are long, cold and dry. Spring and fall are essentially short transitional seasons that experience very unsteady and drastic temperature changes. This winter, for instance, was very long. It started to get really cold last October and was still near freezing this April. In fact, according to Gangwon Notes, it snowed on April 26th in Gangwon-do. Last May, I went camping just north of the Han river and it was literally below freezing at night.

However, you can escape the weather in the north simply by heading south. I might be partial since I had an amazing trip the south last weekend, but Jeollanam-do is really beautiful and the weather seems to be more steady as well as all the other southern islands and cities like Busan, Daegu and, of course, Jeju. That's not to say they don't get cold, they do, but really anywhere in the Gyeongsangnam-do, Gyeongsangbuk-do, Jeollanam-do and Jeollabuk-do usually experience warmer weather. Or since you're an American, I'll put it this way: If you live in northern South Korea, then expect Midwestern US weather (Indiana, Ohio, Iowa, Missouri etc...). If you decide to stick to the south, you can expect southern US weather (Texas, Tennessee, Georgia, North Carolina etc...) 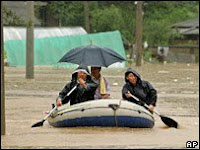 The monsoon season can be bad and it has been known to flood some regions south of Seoul, but for the most part it just means a wet walk to work for about two or three weeks in July or maybe August. In my opinion, like the Yellow Dust issue, the monsoon season tends to be greatly exaggerated.
I'd say that it's nothing that you should be concerned about. Just read the averages and pack well.

If anybody has any questions, just send me an email at asktheexpat@yahoo.com or leave a comment.
by The Expat at 6:02 PM