Some days I live off of cereal and soup. Can you please tell me I will be able to buy such things as Captain Crunch Berries, Honey Bunches of Oats, Ramen Noodles and Hot Chocolate mix with the little marshmallows. I am very open to eating others foods I just wanted to know if they had this stuff or should I try to cram it somewhere in my suitcase. And also can you tell me what foods I just won't be able to get so I can be mentally prepared...lol. I will be living in SangIn, Daegu.

Food always seems to be a big concern and well, I'm sorry to say, but I think I can go ahead a cross Captain Crunch Berries and Honey Bunches of Oats right off that list. You will not find them in any Korean supermarket. Luckily however, you won't be totally out of options. First of all, take a look at EZShop Korea. It does a pretty good job at detailing what's available in the stores. On top of that, you're going to Daegu (which is a lovely city), you will have the luxury of a Costco is your city. Yet, you will be living in Sangin, which is southern Daegu and the Costco is north of the city in Buk-Gu. Here's a little map. 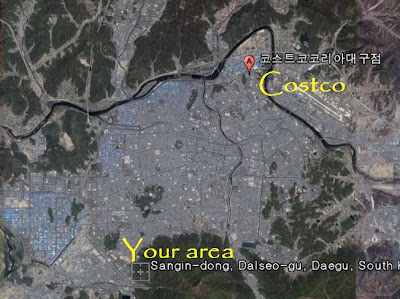 For a quick read on the Costco in Daegu, check out the Galbijim site. It looks like it's a bit difficult to get to for anyone without a car, but they offer some info about it's location.

You can take Line 1 or Red line from Sangin Station to Keungogae Station and "then from exit 4, cross the street to the other side of the intersection and take a cab the rest of the way, which will only be a 3-4 minutes drive." You could also check out some other modes of transportation here.

I have not been to the one in Daegu, but I do know that I have seen the "hot Chocolate mix with the little marshmallows" here in a Seoul Costco. The cereal that I've seen tends to be limited to General Mills cereal and as I'm writing, for some reason I get the feeling that I've actually seen Honey Bunches of Oats, but I'm just not sure. You can look at a broad overview of some of the Costco products here. As for ramen noodles (라면), you're heading to the mecca of all things ramen. The flavor might be a little different from what you're used to, but there is never, ever a shortage of ramen here. Click here for an overview of what Korea has to offer in the world of ramen. Same goes for soup. The average Korean eats soup more than twice a day and the variety is really quite fantastic. Click here and here for a quick look at some Korean soups.

As I mentioned, a lot of people are concerned about adjusting their eating habits to an entirely new taste and it's a totally valid concern. There's nothing easy about it, but after a few months of open-minded dabbling, you'll discover what western treats you can live with and without and which Korean flavors you like. Here's a list of some restaurants in and around Daegu. I also have heard of some people who had friends in the US military that would bring them on the base for some all-western grocery shopping. I know Daegu has four camps around the area, but I don't know what the grocery situation on base is.

But remember, a package from home is always an option.

If anybody has any questions, just send me an email at asktheexpat@yahoo.com or leave a comment.
by The Expat at 4:10 PM

Wows! Thanks this is all very helpful.

My boyfriend and I plan to leave for Korea in Feb. He is allergic to egg and cashews so I was wondering if food in the costco or anywhere really had food labels in English. This is our biggest concern. Thanks!