JT, huh? Hmmm, I wish it was JTT as in Jonathan Taylor Thomas because then it would make perfect sense, but then again it might actually be the boy wonder. After all, Vanilla Ice wrote into the Korea Times today, so who knows who's interested in Korea these days.

I should say that I can't tell if you are curious for personal or academic reasons, so I will try to give you as much as I can about a relatively quiet community.

Alright, rather than delving into the nuances of the LGBT culture, I will instead refer you to an excellent write up on homosexuality in Korea by Ask a Korean. As usual, he nails it down pretty well. There's also a book titled, "Gay 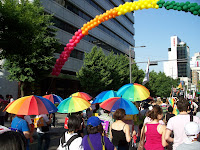 and Lesbian Asia: Culture, Identity, Community". Pages 65-80 deal with Korea. I think it should cover the basics so I don't have to. Yes, there is a transgender culture here. However, like the gay and lesbian culture, you will find that it's either ignored, denied, pushed to the side or dismissed by the average Korean. Nonetheless, the overall LGBT has been active in recent years and some reports claim that there have been up to 70,000 Koreans who have undergone the transformation since the 1970s and while that number might paint a picture of commonality, it is still very much hidden from public.

There has been one icon of the transgender movement in Korea and her name is "Harisu" who got her name because it sounds like "Hot Issue". You can read about her bio here, a music video here and her influence here.
Now to your second question. I don't know what constitutes a "good" trans bar, but I can at least try to point you to where a few are. First of all, take a look at this page (oddly enough the url says something about friends and badminton). If you scroll down the page you'll find addresses and bar names throughout the country. I also took the liberty to do a google search for you about the well-known Transbar in Itaewon. You can click the links on the search page if you want. I am at work, so no chance there.

I wish I could offer you a bit more information (or perhaps OpenMicah, the worlds strongest expat, could offer you some first-hand insight), but I just don't have a lot on this one. To wrap it up, there is a quiet transgender community here and there are some transgender bars, so I think your curiosity, be it personal or academic, will be satisfied.

If anybody has any questions, just send me an email at asktheexpat@yahoo.com or leave a comment.
by The Expat at 10:29 AM

I suggest you use a different email than yahoo. yahoo has a way of throwing emails into junk email even though they may be legit emails.

First off, can't say that I'm a frequenter to Trans bars and all ^^, but I can point you to a few areas that I remember seeing them.

When I used to live in Ilsan, inside the party center - Jeongbalsan - there's a place called JJ's Transgender Bar. It's located upstairs inside a building. Now, I've never been inside it because the bar right around the corner was called "Into's" a popular western - foreigner joint. There's also loud music coming out of JJ's and there's ad cards all over the bathroom floors, so who knows, you could give that a shot.

Now, the "hub" is probably in Itaewon, right across the street from Hooker Hill and Homo Hill. Usually, on Friday and Saturday nights you can see some "butchy" (haha, that's the way my girlfriend described while they were eyeing me down^^)TGs trying to entice customers into their bars/clubs. There's probably a handful of them in that zone, as they're all closely knit together. Like the poster mentioned above, the scene is really under-tow. My GF who's native korean and even lived abroad for a few years, had the greatest curiosity in meeting a TG. And after seeing them, she never wanted to go to that area again, lol. So, that goes to show about what to expect, or let's say, keep expectations down ;)