What's the Deal with the Scars on the Arms of Koreans?

What's the deal with the scar that most Korean women have on their upper arms? Is it from a shot? Can I touch it?

Ha! Yeah, you can touch it, but don't get weird with it. 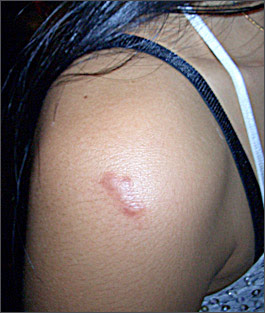 I think many teachers here wonder about this and since it's pretty safe to say that most of us aren't doctors or medical students, it is totally common to be curious about those scars. The scar tissue is from a shot, however, there is a lot of speculation as to which vaccine left such a mark, but after talking to students and cross-checking their stories, it has become clear that the scars are from smallpox inoculations.

Smallpox has a long history in Korea and was treated as the works of demons when first introduced to the peninsula by the Chinese in 583. It was so bad in Korea back then that only one percent of Koreans made it to adulthood without contracting the disease. Of course, the 20th century was nothing like that, but there was still a concern as new strands of the old disease started creeping up around the globe. The 1950s and 1960s saw a steep rise in cases and in 1967 the WHO estimated that more than 60% of the world's population could be threatened. Korea did not take that threat lightly and inoculated most children born from 1953 to 1990. The common type of scar that can be seen on women AND men is called a hypertrophic scar although it should be noted that the shots can also cause the more gruesome keloid scar.

The only other type of shot that was very common during the second half of the 20th century in Korea was the measles shot. However, it is very unlikely that the scars are from measles shots because in order for such scars to appear, there must be an allergic reaction and I just can't imagine that every Korean had the same reaction to the shot.

On that note, I should add that if you teach kids now, you have certainly seen the domino-like 3-by-3 pattern on most of your young students arms. That is a new type of measles inoculation being used today. Luckily, it. Luckily, traces of the shot disappear by adolescence. They started to be used a lot in the late 1990s and early 2000s as some outbreaks started to gain momentum.

Some advice for those of you with close Korean friends. Most women don't like it when their scars are pointed out, so know that you know what they are, ignore it. The men usually don't care, but it's just better to leave it alone.

Also, East Asians (as well as black Africans and African Americans) have a greater incidence of keloid scarring than Caucasians. Keloids are swollen and discolored scars raised above the surface of the skin, and as appears in the above picture. However (and bearing in mind I'm not a medical professional), it seems strange that even a battery of shots would cause that kind of scar. Usually keloids arise from more serious injuries, such as a deep incision.

I don't know that a smallpox scars can be looked like that. I thought it was a bitten scars or else. Anyway does smallpox and chickenpox related? ....

I have seen some arm scars that look like keloids here, but it's not very common. Why is it more common among Asians and Africans?

As far as the difference between the two...

Actually, I was under the impression that this scar was from the vaccination for tuberculosis (TB). See the wikipedia article on the vaccination (including the scar it leaves, and its use in South Korea) here:

All South Koreans were given this vaccine up until the government policy requiring it was discontinued relatively recently.

You guys are getting way too hysterical about these "scars". First of all, this is a technology issue -- not a racial issue. The type of technology that has been used to administer innoculations en masse to Korean-born children starting from the 1930's onwards --particularly for smallpox -- were particularly invasive by western standards, hence the formation of these keloid scars (my Korean-born parents, born in the 1937/40, have these scars, as do all of my Korean-born relations). If you were born in the U.S. or anywhere outside of Korea and wonder why you don't have such a scar, you can thank your local public health officials for that and the fact that innoculations in the West used a less invasive method that was markedly different than the one used in Korea. (FYI, innoculation scars can be used to differentiate Korean-born Koreans from overseas-born Koreans -- Korean Americans, Korean Canadians, and other overseas-born Gyopos don't have the scar, at all.) FYI, for those harping on the "racial theory" regarding formation of "keloid scars", as a full-blooded Korean American, born and raised in the U.S., who has received every innoculation required and demanded of any American schoolkid, and as a U.S. servicemember, who has received every innoculation required of both enlisted and commissioned U.S. military personnel during basic training, ROTC, etc., I do not have one "keloid scar".

My concern is more related to the cause of the scar. It looks like we're in agreement that it's from smallpox. I'm still wondering where the racial claim came from.

As far as the cause of the scar, I asked my 69-year-old mother, who is a retired M.D. btw, about it, and she says back in the day when Korea was under Japanese occupation -- when public health programs and smallpox vaccinations in Korea were administered by Japanese or Japanese-trained doctors -- the procedure for administering smallpox vaccinations was somewhat primitive, if not barbaric, by todays standards, and not always sterile. She says that even after 1945, these practices continued unabated until recently, and are the primary reasons why Koreans born in Korea have these scars.

According to her, she says that back in the day, smallpox vaccinations were administered by a doctor making a deep scratch -- using a "messer", as she described it, or more likely a scalpel -- on a small spot on the subject's upper left arm.

Then, the doctor would smear a small amount of smallpox vaccine into the scratch and cover it up to allow immunity to develop. It was supposed to remain untouched and sterile until a scab formed and fell off, signaling immunity had been achieved. (Apparently this vaccination process was a commonly accepted way of administering smallpox vaccines not only in Korea, but throughout Asia and many developing countries, including Europe, especially 40-50 years ago.)

According to her, the problem was that sterility was often compromised b/c the positive reaction required in healthy subjects usually caused extreme itchiness, which caused a lot of kids to scratch like crazy at the injection site, thus delaying scabbing and causing infections as well as long-term scarring.

Of course, when I compare the method my parents went through to the the hassle free, assembly line, injection gun method used by the U.S. Army to administer my smallpox vaccines, obviously there is no comparison. (I remembered the soreness in my upper arms, as well as itchiness for a few days after the injection, but the scabs fell right off a week later.)

You'll notice, however, injection-site scarring is becoming less and less prevalent in younger Koreans, especially nowadays. My nieces and nephews, for example -- all born in Korea from 1997-present -- barely have a noticeable scar at all.

That's barbaric as hell. I wonder why post-occupation Korea chose to adopt that method rather than the simple needle.

I thought it was BCG/TB vaccine shot scar with some racial reactions of Keloid. But I read more of small pox shot here. it does not leave any or little scar from it. I got the BCG shot and it has just left me with twice bigger size of a scar of any pore around the it. Some Koreans over 40+ might have a bigger scar on them, using the primitive incision. I have seen them done that way when I was really young. And, yes, the scar is from the pus and scab of a thumbnail size.

UHHH..White people have the scars also. Back in the early 60's they lined you up at school and shot you with this type of gun. Wow, imagine, they didn't even bother changing the needle! I remember they also put a plastic cap thingie on the top of it. I don't know where you get that it is on/for Koreans.

Of course white people have scars. Everybody does. The question was about Koreans, not white people. I appreciate your comment, but there is no need to get upset.

Here's something relevant to this discussion: A 2005 letter from three plastic surgeons regarding smallpox vaccinations, and the location used to do them.

Two of the authors are in Taiwan, the other is in the U.S. The photos used are both apparently of Asian (probably Taiwanese) women with childhood vaccination scars. One is quite shocking.

The doctors mention both the site of the vaccination (shoulder) as well as darker complexions as being a factor in the incidence of keloid scarring.

While this letter is hardly definitive, it seems competently written by medical specialists in a professional forum. And it says a couple things:

1) These scars are clearly not just a Korean or Asian issue, and are likely (but maybe not exclusively) smallpox related.

2) However, there is a racial or complexion-related component to scarring. I think that can be fairly easily researched as well.