How to Make your stay in Korea a little better...

I think I can narrow down my request to a simple topic, but I feel like I'm in more need of a pep talk than anything else. I have been in Seoul for 3 1/2 weeks now and I am trying to get adjusted. The hagwon that I work for just notified us that they will be closing in three weeks, but we might be merging with a larger hagwon, Avalon. I'm still waiting to hear the final details, but in the meantime, I am debating what I should do.

I have been told that the first couple of months are the toughest. I came from a large social circle at home so coming here and knowing nary a soul has been a challenge. Do you have any recommendations on social meetings/gatherings or websites that can point me in the right direction (to meet people)? I really don't want to give up on Seoul just yet, but I can see myself going home in three weeks if I can't find a reason to stay. As it is, if the school does merge with Avalon, I will be out of work for 3 weeks while they remodel and I won't really begin teaching for another month after that. My pay will be cut in half while the school is closed and I'm not sure if it's worth it.

I know you can't make my decision for me. I'm pretty much reaching out. However, if you know any good meetup websites, I would appreciate the information.


Adjusting to a new country is never easy. As you said, the first few months can be the hardest as well. Let's look at the phases of culture shock and see if we can figure out where you might be.

Honeymoon Phase - During this period the differences between the old and new culture are seen in a romantic light, wonderful and new. For example, in moving to a new country, an individual might love the new foods, the pace of the life, the people's habits, the buildings and so on.

Negotiation Phase - After some time (usually weeks), differences between the old and new culture become apparent and may create anxiety. One may long for food the way it is prepared in one's native country, may find the pace of life too fast or slow, may find the people's habits annoying, disgusting, and irritating etc. This phase is often marked by mood swings caused by minor issues or without apparent reason. Depression is not uncommon.

Adjustment Phase - Again, after some time (usually 6 – 12 months), one grows accustomed to the new culture and develops routines. One knows what to expect in most situations and the host country no longer feels all that new. One becomes concerned with basic living again, and things become more "normal".

It looks like you're already in the second phase which of course, is the hard one. You mentioned that your work is proving to be a little unsteady as well and that makes an already difficult situation even harder. So, let me offer a little advice.

While you are here to work and make money, I assume that working was not the real reason you decided to come abroad. You need to rediscover that feeling you had before coming to Korea and the best way to do that is to ignore work. Ignore it. Do a good job while you're there, but don't treat it as if it were your career. It's probably not anyways. Work life in Korea is never smooth and trying to make it that way consumes way too much time and often proves to be fruitless.

You sent me a second email as well.

I just left the restaurant business after 14 years so I do like going out for a drink and I also love music and dancing. I have a deep interest in history, so cultural outings always intrigue me and I am always open to new experiences. I love to travel, so seeing more of Seoul and the surrounding areas is a priority.

Let's take this one interest at a time. You were in the restaurant business for over a decade, so I think you need to go with that. There are numerous food blogs that cover some really neat restaurants in the area. Make it a point to try and check a few places out every week.

* Seoul Eats is arguably the best food blog in the K-blogosphere and is regularly updated with new pics, restaurants and reviews.

Those are in no way all of the food sites though. If you click on any of the above links, they will have several resources linked on their sites as well. You also mentioned you like going for drinks. Well, I don't really have to go into detail on that front since Koreans are heavy drinkers and the prevalence of hofs and bars attests to that, but where to go is another question.

You mentioned that you lived in Seocho, so you're just south of the River. Most of the high-traffic establishments are to the north, but you have options nearby.

Besides all the great restaurants in the area, there are some great bars as well. Personally, I like four or five bars in the area. In the Gangnam area, I prefer a small dive called "What Sub". It's a Korean bar, mostly frequented by Koreans, but the drinks are cheap (2 dollar shots) and the atmosphere is relaxed. There are also two bars called Woodstock in the area. The main Woodstock or "Woodstock 1" is smaller, more popular and heavily frequented by English teachers. They offer good music (It's a request system, so it can get bad), but the prices have gone up a lot (2000cc for 13,000 won). Woodstock 2 is a quieter, basement bar that sells mostly beer (sometimes they have Jager) and plays exclusively classic rock. There's also Castle Praha. I like this place because it's huge and you can get non-Korean beer. Here's a map. 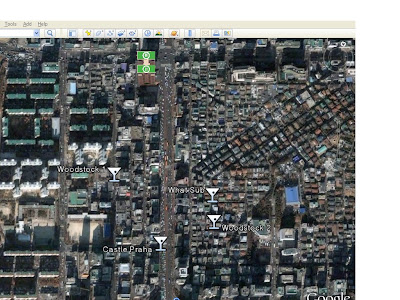 In Apgujeong, I would recommend Monkey Beach. Cheap drinks, nice people and it even has a nightly fire show. I assume you know the other party areas of Seoul like Itaewon and Hongdae, so aside from a link, I shouldn't have to go into detail.

You mentioned you like dancing and music. Dancing can be found at just about any place in the city, but good live music is sometimes a stretch. I have written about this before and have tried to come up with a pretty comprehensive list of where you can find some good music. It depends on taste though. Drop by Expat-Advisory as well. They've got a lot of good stuff up there for you.

You mention history as well. Well, Seoul has a bunch of really great museums, not to mention a ton of historical sites throughout the city. I always suggest that people new to Korea go and pick up Michael Breen's book "The Koreans". Not only is it a fun read, but it also delves into a little history which is something you would like. You can find it at Kyobo Bookstore and just about all of the other ones.

Your next interest is where I will really be able to give some advice. You like to travel. That's perfect and is the best way to meet people. I should offer the official Korea Sparkling site for some ideas, but the real place to meet some good people who are in need to something more than the late-night benders is at Adventure Korea. They take great trips year around and give people the chance to make close friends. I always point people in their direction because everyone always finds something there. If you're into travel, then this is something you should jump on. Also, Ask Now is organizing a huge group of people for this years Mud Festival. That's something you should consider as well.

In the end, most people get frustrated in a new country because they haven't made any solid friends and they miss that connection. It's totally normal. There are endless social groups and organizations out there and all it takes is a little effort.

Fellow K-Blogger, Roboseyo, also offers some advice on "How to love the heck out of Korea." He's a little sugary, but sometimes that's what we need.

For my personal advice, don't give up yet. You came here for an experience and I know you would be letting yourself down if you gave up this early. There is so much amazing history, culture and natural beauty to see on the peninsula and so little time to see it all. You need to get out, break down any barriers you have set around yourself and be free. This is your year to rediscover what you love about life. Don't let the stress of work get in your way. You're not here to work and sleep, so don't let that happen. Contact Adventure Korea, go to a museum, dance to the music and just let it go. Very few people have the opportunity that you have right now. You get to leave the routine of life behind and just break free in a new country and a new world. And when the time does come for you to leave Korea, you will be a much richer person because of what you did. Don't give up. Your adventure has only just begun.

If anybody has any questions, just send me an email at asktheexpat@yahoo.com or leave a comment.
by The Expat at 10:40 AM

How exactly do you get to What Sub? I know where Castle Praha is since it's on the main street but those little side streets are so confusing.

I'll write a quick post about it with detailed directions.